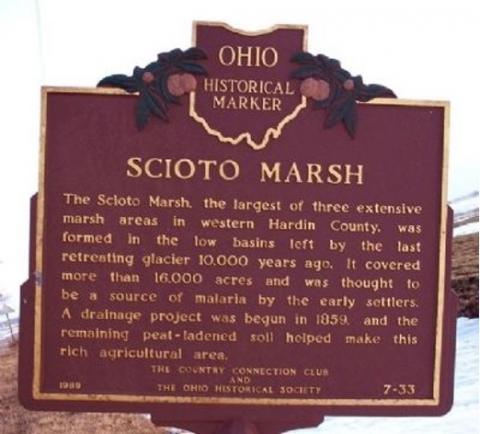 The Scioto Marsh began as the last of the great glaciers was on the march, and would become in turn, a lake; a marsh; the scene of a giant engineering project and one of the richest farming centers in North America.  It was a place where men were wealthy one day and poverty-stricken the next; a social problem; and the subject of a pioneer experiment in the suppression of poverty.

At its beginning, the lake was filled with ice water from the retreating glacier.  A few plants ventured into the margins, flourished and died of old age.  From their stalks, other plants drew nourishment and produced more luxuriant growths.

As the centuries rushed by, the water plants ventured farther and farther from shore.  Behind them came the swamp plants.  Silt from the surrounding hill washed into the basin and clogged it.  At length the lake became a stinking black muck of decayed vegetable matter.  In this swamp there was fabulous natural resources.   The soil was rich-swamp grass ten feet high and as thick as a lead pencil.

After much effort by many determined men, the swamp was drained, and became farmland of incredible fertility. In 1887, Colonel C.H. Sage realized that the muck was made to order to grow onions.  After a few good years and a few bad, the new crop caught and the King Onion was definitely on the throne. The marsh has rich history and many great stories about the pioneers that conquered it.  Come to the library and find out more!