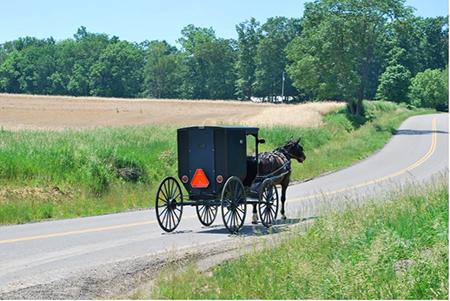 The Amish are a religious group who live in settlements in 22 states and Ontario, Canada. The oldest group of Old Order Amish people live in Lancaster County, Pennsylvania. The Amish stress humility, family and community, and separation from the world.

The Amish have their roots in the Mennonite community. Both were part of the early Anabaptist movement in Europe, which took place at the time of the Reformation. The Anabaptists believed that only adults who had confessed their faith should be baptized, and that they should remain separate from the larger society. Many early Anabaptists were put to death as heretics by both Catholics and Protestants, and many others fled to the mountains of Switzerland and southern Germany. Here began the Amish tradition of farming and holding their worship services in homes rather than churches.

In 1563, a young Catholic priest from Holland named Menno Simons joined the Anabaptist movement. His writings and leadership united many of the Anabaptist groups, who were nicknamed "Mennonites." In 1693, a Swiss bishop named Jacob Amman broke from the Mennonite church. His followers were called the "Amish." Although the two groups have split several times, the Amish and Mennonite churches still share the same beliefs concerning baptism, non-resistance, and basic Bible doctrines. They differ in matters of dress, technology, language, form of worship, and interpretation of the Bible. The Amish and Mennonites both settled in Pennsylvania as part of William Penn's "holy experiment" of religious tolerance. The first sizable group of Amish arrived in Lancaster County in the 1720's or 1730's. The Amish arrived in northern Ohio in the late 1800's. Today, Hardin County is home to many Amish families.

Although the Amish look like they stepped out of the rural nineteenth century, in fact they do change. Their lives move more slowly than ours, but they definitely are not stuck anywhere. They choose to examine change carefully before they accept it. If the new idea or gadget does not assist in keeping their lives simple and their families together, they probably will reject it. Each church district decides for itself what it will and will not accept; there is no single governing body for the entire Old Order population, but all follow a literal interpretation of the Bible and an unwritten set of rules called the Ordnung. The Amish drive horses and buggies rather than cars, do not have electricity in their homes, and send their children to private one-room schoolhouses. Children attend only through the eighth grade. After that, they work on their family’s farm or business until they marry.

Most Amish are trilingual. They speak a dialect of German called Dutch at home; they use High German at their worship services; and they learn English at school. They speak English when they deal with anyone who is not Amish.

Old Order Amish women and girls wear modest dresses made from solid-colored fabric with long sleeves and a full skirt. These dresses are covered with a cape and apron and are fastened with straight pins or snaps. They never cut their hair, which they wear in a bun on the back of the head. On their heads they wear a white prayer covering if they are married and a black one if they are single. Amish women do not wear jewelry.

Men and boys wear dark-colored suits, straight-cut coats without lapels, broadfall trousers, suspenders, solid-colored shirts, black socks and shoes, and black or straw broad-brimmed hats. Their shirts fasten with conventional buttons, but their suit coats and vests fasten with hooks and eyes. They do not have mustaches, but they grow beards after they marry. The Amish feel these distinctive clothes encourage humility and separation from the world. Their clothing is not a costume; it is an expression of their faith.

The Amish are a private people who believe God has kept them together despite pressure to change from the modern world. They are not perfect, but they are a strong example of a community that supports and cares for its members. They are a people apart; they are also a people together.